The stock market, like pretty much every other asset class, is as frothy as ever.

The S&P 500 looks poised to cross the 4,000 milestone any day now and is trading at a price-to-earnings ratio of 40, nearly as high as it was at its peak during the dot-com era. Both recovery stocks and pandemic winners are looking dearly priced, as even stocks that were hit hard by the pandemic, like Macy’s and Live Nation Entertainment, are trading above pre-pandemic levels. Pandemic winners like Wayfair, meanwhile, are also trading at all-time highs even as they face obvious headwinds as they lap a pandemic-fueled surge last year.

Value stocks, in other words, aren’t easy to find. However, there’s one retail stock that fits the classic definition of a value stock — it’s worth more than it’s trading for.

That’s Walmart (NYSE:WMT). Based on conventional valuation metrics, Walmart certainly looks reasonably priced at a price-to-earnings ratio of 28, or a 30% discount to the S&P 500, but the real reason the stock looks like such a great value is that the sum-of-the-parts valuation looks much greater than its current market cap of around $375 billion.

The key components of Walmart’s business are a brick-and-mortar retail empire anchoring the world’s biggest company by revenue; a fast-growing e-commerce business that is the second-largest in the U.S. (behind Amazon); a warehouse club chain, Sam’s Club, that is the second-biggest in the world (behind Costco); an international business being reoriented toward growth markets led by Flipkart and PhonePe in India; and, finally, emerging businesses in areas like healthcare, fintech, and advertising.

Let’s take a look at how to value each of these businesses. 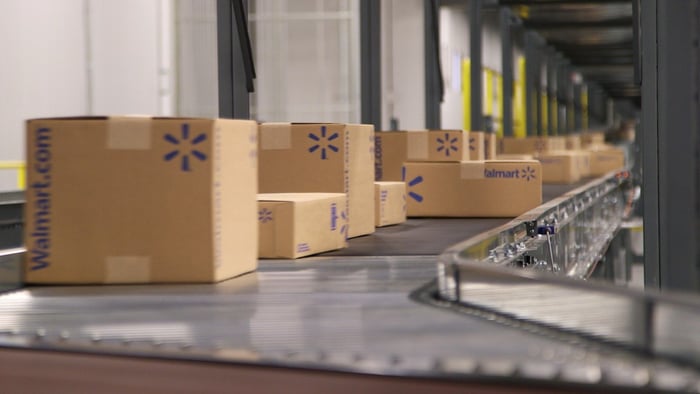 What is Walmart’s e-commerce business worth?

Walmart doesn’t cleanly separate its brick-and-mortar retail business from its e-commerce business, as the two often work together to provide an omnichannel experience with services like grocery pickup. But the company does give some clues about its e-commerce performance.

In fiscal 2021, which ended in January, Walmart U.S. recorded $43 billion in e-commerce revenue, while the international segment contributed $16 billion, and Sam’s Club added another $5.3 billion for $64.3 billion in e-commerce revenue total, or about 11% of overall revenue. Walmart doesn’t give profitability numbers on e-commerce. It has said the business operates at a loss, but that the loss is narrowing and should continue to do so. Growth in e-commerce has been strong, rising 62% last year, aided by the pandemic. The year before, total e-commerce sales grew by 58%, aided by the Flipkart acquisition.

There’s no perfect peer to compare Walmart’s numbers to, but Wayfair offers one analog. Revenue at the e-commerce home furnishings company jumped 55% last year to $14.1 billion thanks to pandemic-driven tailwinds. The company also turned profitable for the first time, posting net income of $185 million and adjusted EBITDA of $946.9 million. Wayfair will face difficult comparisons this year, as much of the spending on home furnishings has come from adjustments Americans needed to make during the pandemic, and those stay-at-home requirements will soon end. The company is valued at $35 billion, or a price-to-sales ratio of 2.5. Using that figure would give Walmart’s e-commerce business a valuation of $160.8 billion, or nearly half of the company’s market cap. Arguably, Walmart’s e-commerce business should get a higher ratio than Wayfair. Even though Wayfair is profitable while Walmart e-commerce isn’t, Walmart is growing faster than the home furnishings seller and isn’t facing the same hangover this year, as demand for groceries — Walmart’s primary business — isn’t as sensitive to the pandemic as home goods are.

Another useful comparison is to an earlier version of Amazon. The e-commerce giant finished 2013 with $74 billion in revenue, a small percentage of which was from Amazon Web Services, which was not a separate reporting segment at the time. That year, Amazon generated revenue growth of 22% and operating income of $745 million, showing it was growing slower than Walmart’s e-commerce biz, but it was profitable. Amazon finished that year with a market cap of $183 billion. Extract a percentage of that market cap to account for AWS and you get a valuation equal to the $160 billion from using Wayfair as a model.