This year has been one wild ride after another…

The pandemic forced a hard reset button on the whole world. The routine for every person on the planet has changed. Economically the impacts have been mostly devastation but pockets of strength have emerged in the equity markets. Within those are a slew of hot stocks breaking records.

Today we look at three stocks that have caught fire for different reasons. Their stocks have big gains and more potential wild action ahead. There are opportunities for profit, but stocks this hot carry a ton of risk. The fundamentals on momentum stocks like this are thin because their potential rewards are set in the future results.

Therefore, investors must use as many tools as possible, including technical chart action, to avoid disastrous mistakes. 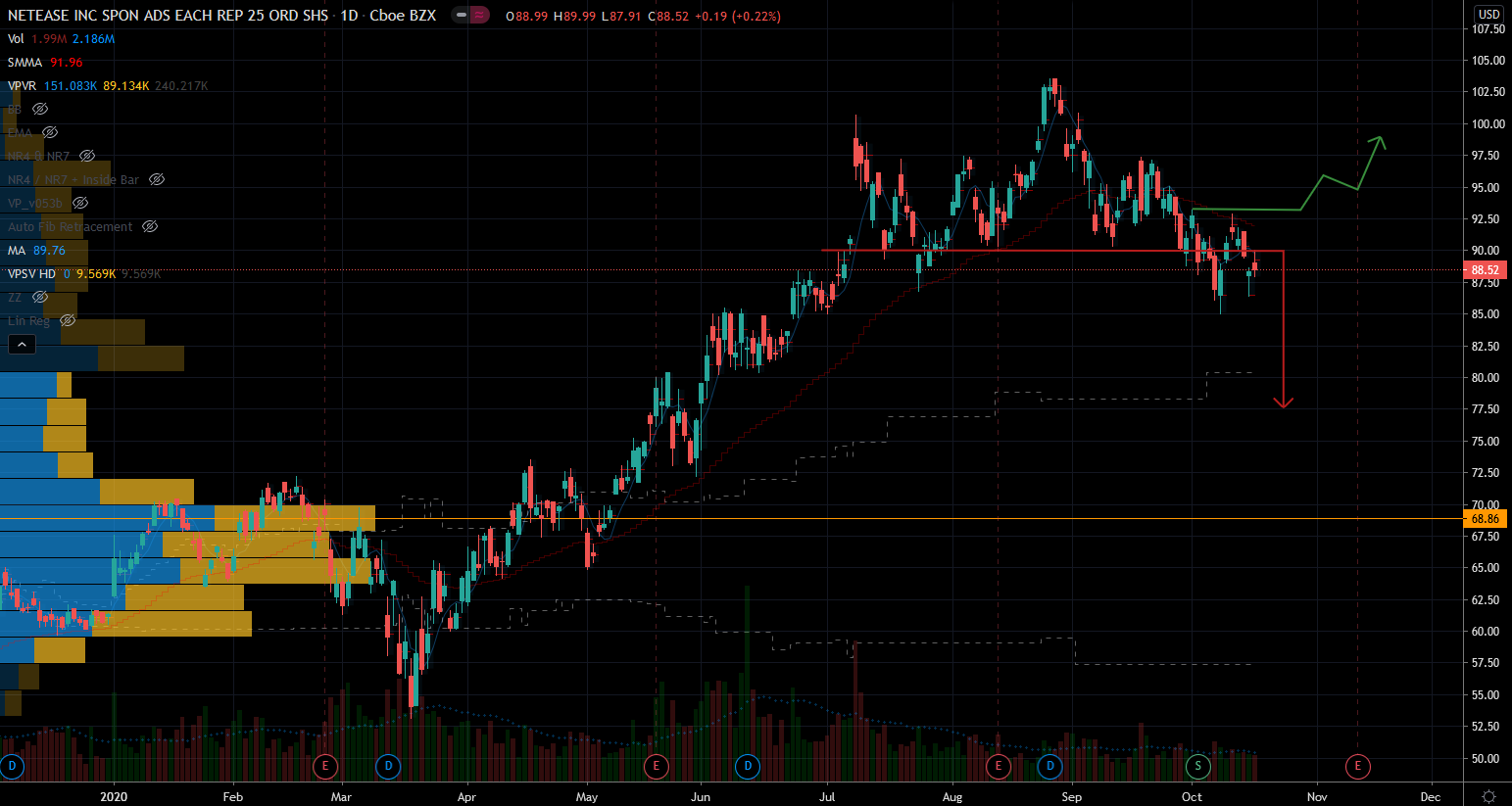 NetEase recently split its stock, so it will take a few weeks for it to find its new grove. Meanwhile, it continues to consolidate, so it can rebuild its base after its last eight week slide. NTES stock is 14% off its August highs, but also 68% above the March lows. It is still 23% above the February levels just before the novel-coronavirus-induced quarantine. This confirms that Wall Street does not think that NetEase has any obvious problems specific to itself. In fact, year to date, it is performing 22% better than the Invesco QQQ Trust (NASDAQ:QQQ).

Fundamentally, the company is set in the right segment. Gaming is now bigger than ever thanks to a boost in popularity from the pandemic. When people are stuck at home they game more often. Also after the reopening the trend continues to be less socializing; therefore, there are more opportunities for other forms of entertainment. China is important to NetEase and it was the first country to start the recovery from the outbreak. That could lead to a tailwind for NTES stock.

Valuation matters and it is reasonable. There is no obvious bloat there. The 2019 net income doubled from that of 2016 so they are on the right track. Judging by last year’s quarterly results, the coming months are important. Since this year gaming is big, the company could surprise investors to the upside. Earnings are coming soon and it will be worth holding shares into it.

Otherwise, there is support at $85 and $80 per share. These are big pivot zones that the bulls will likely defend. If stocks in general correct, then the NTES stock February neckline lurks near $74 per share. The bulls are probably comfortable knowing that the most likely short-term pain scenario is just 6% below. They still have to be cautious because when it lost $90, it could have triggered a bearish pattern to $77. But it’s not necessarily going there without help from the broader markets.

Jaw-dropping “behind the scenes” footage shows new battery that could take down Big Oil… Big Auto… even Tesla.

For early investors, this presents the kind of opportunity that could turn a tiny initial stake into an absolute fortune.

See a demo of this breakthrough in action here. 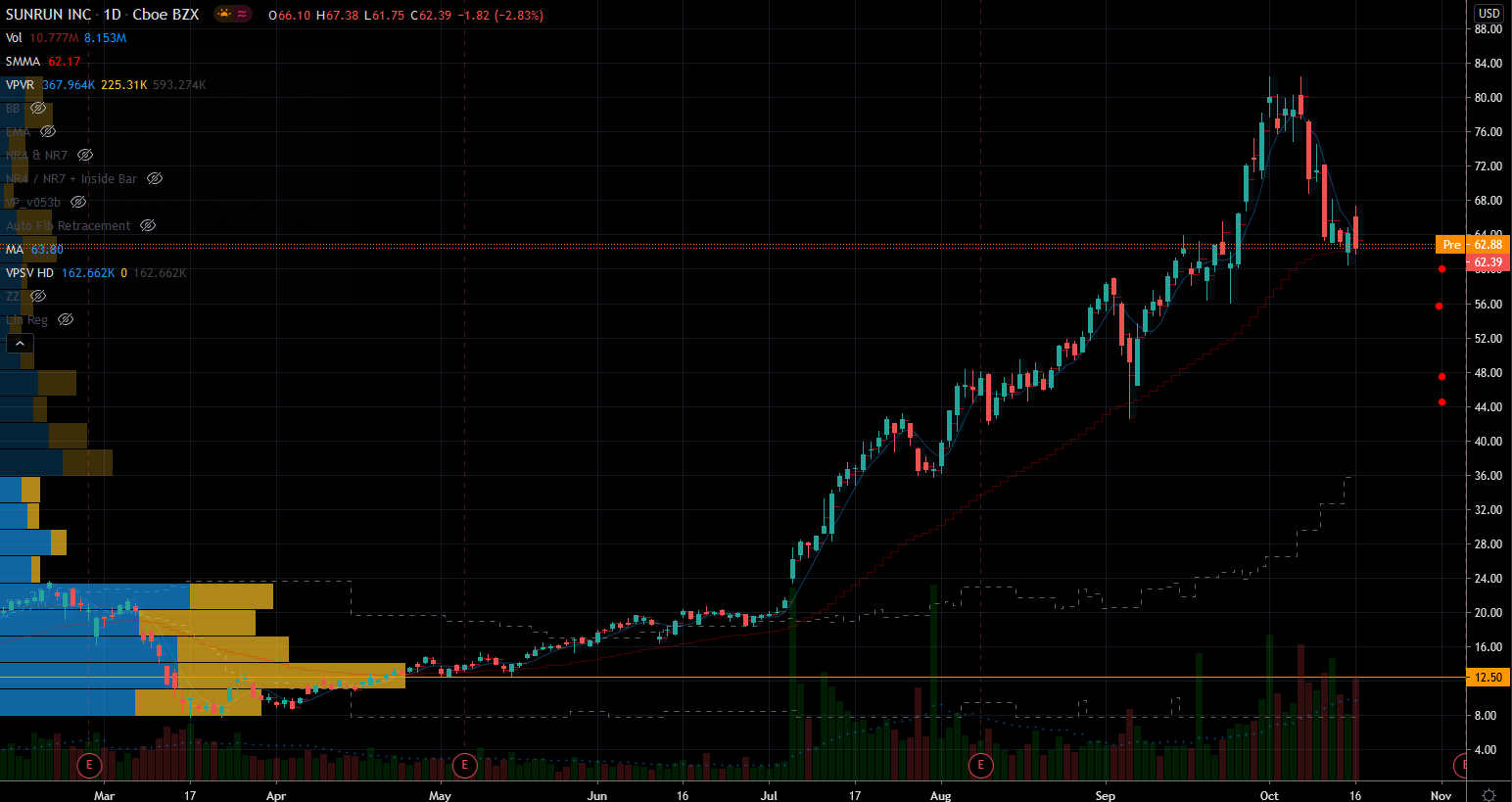 Solar stocks rallied 35% from late September most likely from speculation on the U.S. election outcome. A change in leadership could bring good things for alternative power. The opportunity today is to find a decent entry point into RUN stock. The whole cohort like Invesco Solar ETF (NYSEARCA:TAN) and First Solar (NASDAQ:FSLR) recently rallied 30%, but RUN has given up almost all of it. Nevertheless, year-to-date it is still up more than 500%, which is still ten times more than FSLR.

Last week RUN fell back into the September base, so it is back into good footing for bullish bets. If for some reason the selloff continues, then there are two other bases below. The first is near $56 per share from the pivot in late August. The second is at and around $45 from early August. The recent upside may have gone too far ahead of actual improvements in the fundamentals. Wall Street has a habit of throwing fits after big rallies on headlines.

They don’t ring bells for perfect entries into stocks, so investors need to make judgement calls. A big determining factor is the time frame in play. Long-term investors can nibble into RUN stock around these levels. Doing so in stages makes the most sense to leave room for error. The October rally was electrified by political speculation, so it is fraught with danger. Any change in the sentiment over the election outcome will bring severe disappointments in solar stocks. Since RUN has given up most of its greens then maybe it would hold up better than the rest.

In the end and regardless of who wins, the fundamental improvements have to come from within. The viability of solar power has to make economic sense for the consumers. We got solar for our house in California from Sunrun in 2017, but only because it was almost free. The offer through Costco (NASDAQ:COST) was too enticing to pass up. The more exciting step would be to add the off-the-grid solution. Therein lies the longer-term opportunity. It makes sense that we all have backup battery power. As of this weekend, I am waiting for my quote on this from RUN. The choices they noted are LG and Tesla (NASDAQ:TSLA). 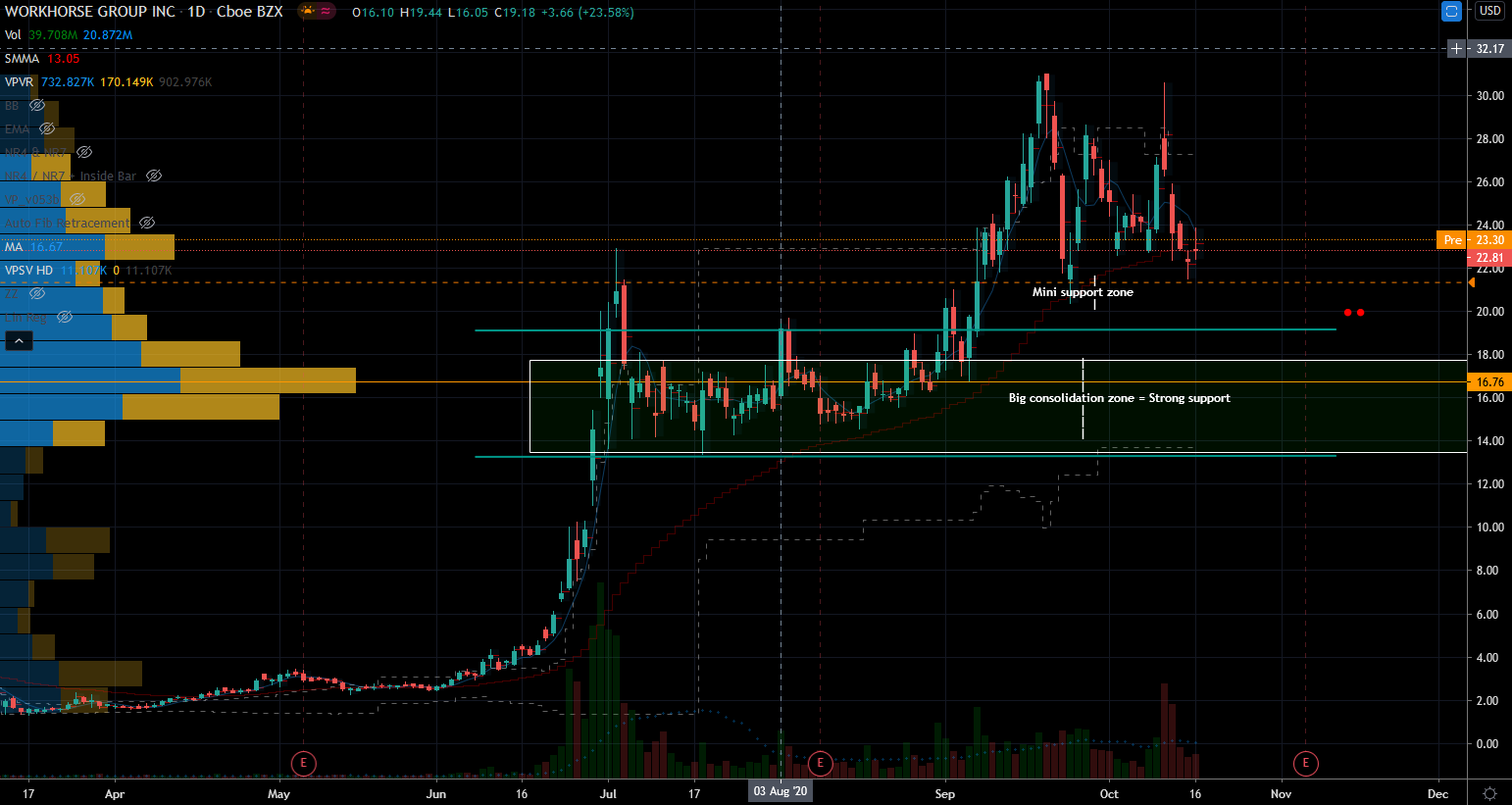 One of the hottest themes this year is electric vehicles (EVs), especially the startups. The Special Purpose Acquisition Corporation (SPAC) concept is all the rage on Wall Street this year. Workhorse is one of those companies that took the shortcut to come public. The stock has done very well so far. But for the last two weeks WKHS stock has hit the skids to the tune of 30%. There could be more pain just because it has very little intrinsic value on its current profit and loss statement.

This company is still in pre-production, so the whole thesis is based on faith in forward progress. However, there is a lot of support on the stock chart near $20 per share. Emotions are running high this year among investors; one way to neutralize this emotion is by relying on technical information. The correction from $31 per share has reached its intended target near $20 twice. This sets a trade-able bottom, making it a viable thesis to add shares for the very long term. If an investor missed it the first time around in September, this is their second chance to get on board.

This means that the risk in it must be low enough to not devastate the investor portfolio. In other words, don’t go all in yet. It’s something that has not yet developed tangible financial results. It is exciting to take part in the future, but the internal combustion engine is still the winning ticket. EVs are mounting a challenge to that, but they have a long way to go. Tesla has paved the way for the likes of WKHS. This makes for a smoother ride for them than it was just last year.

The current Tesla financial metrics have improved so drastically that it is on better footing than Ford (NYSE:F) or General Motors (NYSE:GM). The expansion continued to accelerate even through the worst economic downturn ever. This is an incredible feat and proves the concept. Workhorse will benefit from that. The company is a risky opportunity bet. The exciting part is that the sky’s the limit and it will take time to prove it wrong or right. Until then, the bulls have the edge, so buying the dips makes sense. This applies to all three. But conviction in hot stocks is almost always medium to low at best.